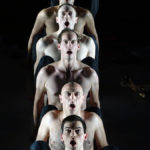 Antigone inaugurated the international project Unburied dead; the project, directed by Theodoros Terzopoulos, will be later developed in other countries, in collaboration with theater institutes, artists and universities. While Antigone was running in Wilma Theater, parallel events like workshops, photo exhibitions, conferences, open discussions on the topic of Unburied dead were organized in Philadelphia and New York.

The project Unburied dead was inaugurated a few months earlier, on May 30th, 2015 in Attis Theatre with a poet marathon, coordinated by Thomas Tsalapatis. Twenty one young poets and poetesses read earlier and new poems on the theme of Unburied dead, in a dialog with what separates memory from oblivion, shadow from darkness, presence from absence, Now from Never.

You can find out more about which cookies we are using or switch them off in settings.

This website uses cookies so that we can provide you with the best user experience possible. Cookie information is stored in your browser and performs functions such as recognising you when you return to our website and helping our team to understand which sections of the website you find most interesting and useful.

Strictly Necessary Cookie should be enabled at all times so that we can save your preferences for cookie settings.

These cookies are used for web analytics by Google Analytics

Please enable Strictly Necessary Cookies first so that we can save your preferences!